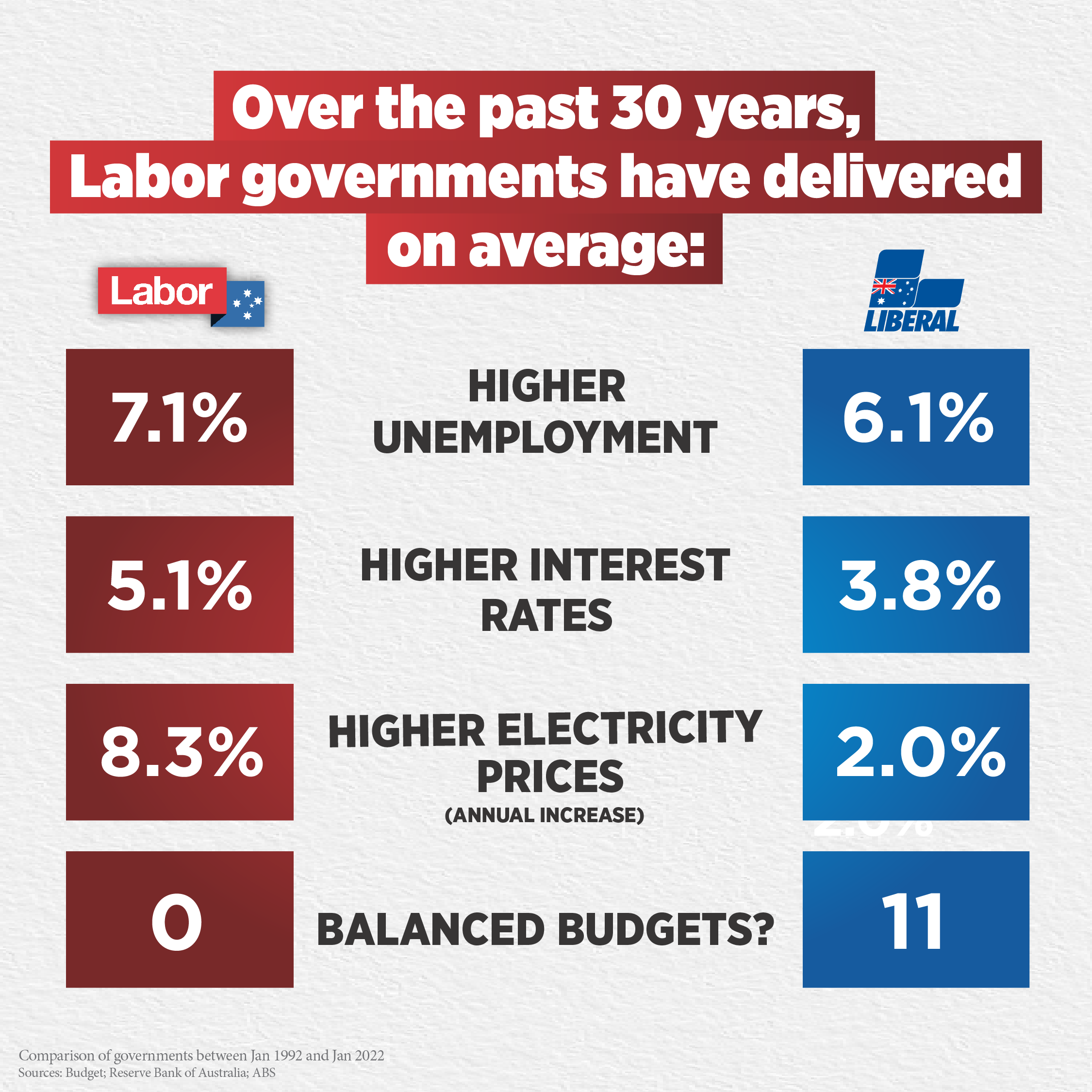 Over the last 30 years, Labor Governments have delivered, on average, higher unemployment, higher interest rates, and higher electricity prices. And not a single balanced budget.

The last time Labor balanced a budget was in 1989.

In 2014, the International Monetary Fund reported Australia’s government spending growth between 2012 and 2018 (under Labor’s budget settings) was projected to be the highest among 17 advanced economies.

In 2012-13, when Albanese was in Cabinet, Labor cut Defence spending to its lowest level since 1938.

It was left to the Coalition Government to fix Labor’s mess.

Labor tried to stand in the way of repairing the Budget.

If Labor had their way, Australia would not have been in as strong a position to respond to COVID-19.

Labor would have spent an additional $81 billion during the pandemic – including $300 cash incentives for Australians that were already double-vaxxed, free rapid antigen tests, an expansion and extension of JobKeeper and higher coronavirus supplement payments.

This would have added a further 10% to Australia’s debt.

Labor have made $302 billion of vague promises but they refuse to say how they would pay for them.

Despite advertising that their policies were “fully costed”, one of Labor’s first policies released during the campaign, for urgent care clinics, had not been formally costed by the Parliamentary Budget Office, as they had claimed. (Source: Senator Katy Gallagher, Twitter, 14/04/22)

It would also mean higher taxes.

At the last election, the Labor team, including Mr Albanese, argued for $387 billion in higher taxes – on retirees, housing, incomes, investments, family businesses, superannuation and more.

Australians simply can’t trust Labor when it comes to taxes, or the economy.

Will you donate to the Election Fighting Fund and help us stop them?

The success of the Liberal Party of Australia depends on the generosity of many Australians who choose to financially support us. By donating to the Liberal Party you are making a direct contribution to our campaign to win the 2022 federal election.