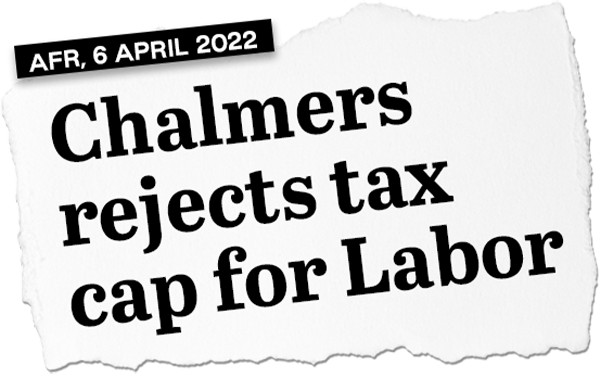 “Anthony Albanese has refused to answer a question about whether Aussies will pay more tax under his election plan five times in a breakfast TV interview.”

However, he ended up backflipping: "Anthony Albanese said… the Shadow Cabinet had decided it would not stand in the way of relief for 'working Australians'." (Source: The Guardian, 4/7/19)

As Assistant Secretary of the ALP, Mr Albanese led a motion at Labor’s National Conference calling for the introduction of an inheritance tax (death duties).

An inheritance tax was also reaffirmed as the policy of Labor affiliated unions at the 2021 ACTU Congress, and is the policy of the Greens, who want a power sharing agreement with Labor.

As a Shadow Minister, Mr Albanese has also called for a wealth tax.

Labor would have spent an additional $81 billion during the pandemic – including $300 cash incentives for Australians that were already double-vaxxed, free rapid antigen tests, an expansion and extension of JobKeeper and higher supplement payments.

This would have added a further 10% to Australia’s debt.

Labor have made $302 billion of vague promises but they refuse to say how they would pay for them.

Labor can’t manage money, so they end up coming after yours.

Will you donate to the Election Fighting Fund and help us stop them?

The success of the Liberal Party of Australia depends on the generosity of many Australians who choose to financially support us. By donating to the Liberal Party you are making a direct contribution to our campaign to win the 2022 federal election.